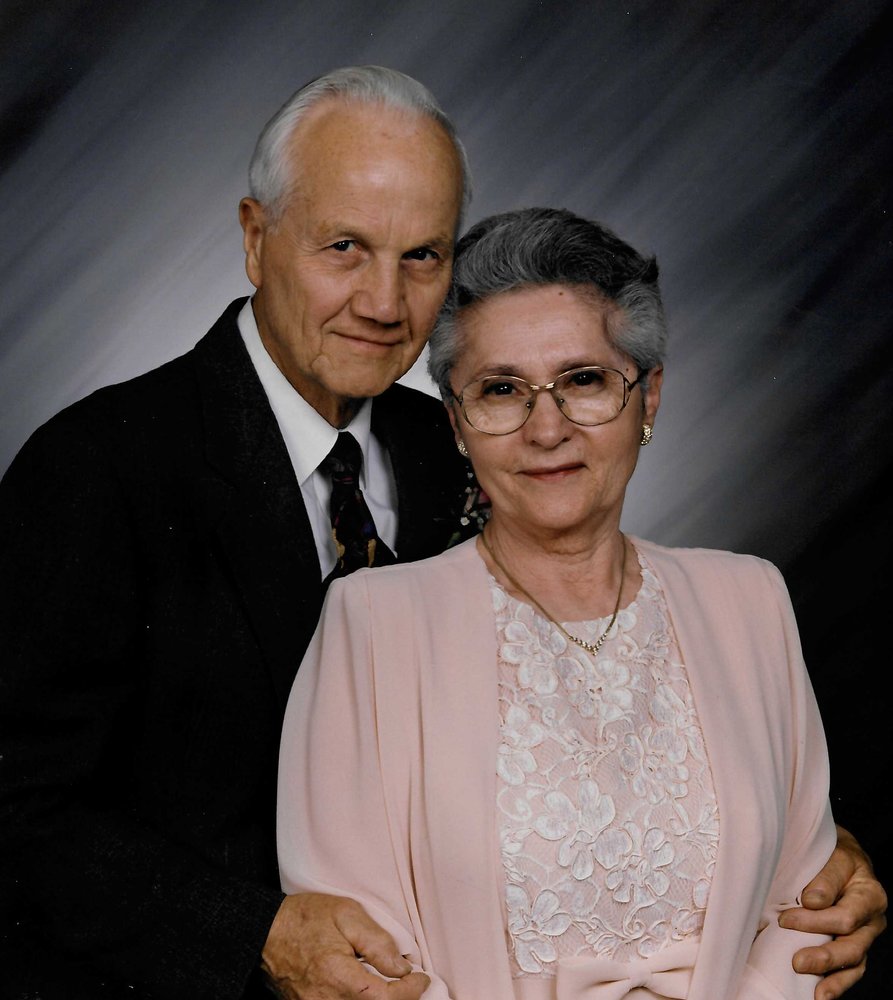 She and her future husband John (Jean) Robert met in high school and married on October 18, 1947.  They were devoted partners until his death in 2006.

The pillars of Mary and John’s life were their faith, and their family.  They also enjoyed gardening and traveled extensively.

Memorial contributions are appreciated to Food for the Poor or Catholic Relief Services.

A Personal Reflection on the life of Mary Robert by her firstborn son, Jim

How do you summarize a lifetime that included over 97 trips around the sun; and saw the dawning of over 35,500 new days.

Early in the last century, recently married Italian immigrants Joe and Margaret Colombo gave birth, in their humble home on Preston Street in Detroit, to their first child, and named her Mary.  Eventually she would have three sisters, Jo, Dorothy, and Clare.

Mom grew up on the east side of Detroit through the 1920s and 30s, sharing childhood memories with her sisters who looked up to their older sister.  That home on Preston was originally built as a farmhouse to the surrounding area, and many stories of those early years included reference to the minimal comforts of that house.  Cousins and other relatives lived nearby, and they navigated the depression years together.

Mom and her sisters were baptized in the Catholic church and attended Catholic schools. These experiences helped to form in her a lifetime devotion to her faith.

By the time her youngest sister was born, the family had moved up Gratiot to larger and more elegant quarters on Holcomb Street.  These childhood years were full of experiences of many Detroiters of the time, like taking the streetcar to local destinations, sharing a Vernor’s ginger ale, attending the annual Thanksgiving parade, or maybe an outing to the big Hudson’s department store.

In mom’s teen years, she attended St Charles high school, and there met a boy destined to become her husband.  They weren’t close as teenagers, but the years of the second world war followed those high school years.  John enlisted in the US Navy and served as a Seabee.  Mary and John Robert corresponded regularly through letters they cherished receiving from each other.  Through those letters they would eventually become engaged, and as a young married couple, sometimes boxes of those letters came out for a trip through nostalgia.  We still have some of them.

After the war, dad mustered out of the service and took a job.  Mom finished school, earning her degree from Marygrove College, and went to work for a time.  Shortly she earned a master’s degree in Social Work from the University of Michigan.  Her thesis was entitled “Reinvestigation of Single Person Welfare Cases”.

Mary and John were married in fall of 1947, and honeymooned by car to Gettysburg, Mt. Vernon, and Washington, DC.  Initially, they lived with her parents in that home on Holcomb Street, occupying an upstairs “apartment”.  (Two of her sisters later did the same.)

Their first child, Jim, was born in 1948, and the three of them lived on Holcomb until they saved a down payment for their own home.  Dad worked in a Studebaker dealership and their first car was a green Studebaker.  Mom later learned to drive, from dad, in that car, of course with a manual transmission.

That home they saved for eventually materialized on Veronica Street in Ecorse Township.  It was purchased for $12,000; and the family moved there in January, 1951.  The street was a dirt road, and the area was quite undeveloped.  Not too much later mom’s sister Jo, and her husband Mike, moved into a home a couple blocks away.

Dad went to work at a tool and die shop, John Hancock Tool & Die in Lincoln Park, and learned the trade in which his father had also worked.  Later dad formed his own tool & die business, and while dad worked hard to build a business and provide for his wife and family, mom made a home and tended a growing family which by 1960 included 5 children.

Dad invested a lot of effort into building the house and home.  He personally made kitchen cabinets.  He raised the second story into bedrooms for the growing number of family residents and added the “den” that became the social center of the house where the family gathered for holidays and large family meals.  Mom kept a recipe collection on 3x5 cards and dad built a special divided drawer in the kitchen cabinet where she organized them.

The family all participated in a newly established and growing parish, St Pius X Catholic Church.  All of us kids eventually attended the grade school there.  When the church and school had their first fundraising “fair”, the grand prize for the raffle was a home movie camera outfit, which mom and dad won!  The 8 millimeter movies produced by that prize provided many nights of home movie family entertainment over the years, reliving holiday gatherings and family vacations many times over.

Through the 1950s, 60s, and 70s, mom’s family grew up with her constant attention and guidance.  She was always there for us and had dinner ready for the kids at 5:30 so she could clean up and share dinner peacefully with dad after he got home from work about an hour later.  She’d try out new recipes and score each one with her own rating system on those 3x5 cards.  Dad and she planted gardens and continually refined the landscaping around the house.  She was a reader who kept up with what was going on in the country and the world, and a classic books club discussion leader at the YMCA.

During these years, Thanksgiving, Christmas, and Easter included a large family dinner with the Colombo side of the family, and annual New Year’s Eve parties (without the kids) were held on the Robert side of the family.  Lots of sharing and memory making included!

Mom was an active member at the church, volunteering at the rectory and participating in activities at the school.  She also shared of herself volunteering as a “crisis” phone line counselor for a few years.

As the family matured and it became more possible, mom and dad traveled frequently.  In July of 1975, they took a big lap around America (with Tom & John).  They saw plays at Stratford, Ontario and the Shaw festival at Niagara-on-the-Lake, Ontario.  Frequent Elderhostel trips included new surroundings connected with educational activities (all the way into the 2000s).  A few Seabee reunions were attended.  Wide ranging destinations included Canada, Great Britain, Scandinavia, Europe and the Mediterranean, Alaska and Hawaii, China, and Australia / New Zealand.  Some of these included a cruise, where mom says she nearly always got seasick.  Travel companions included good friend Mary Catherine and Bill Butts, her sister Jo (and Mike), dad’s brother Paul (and Gert) and sister Rita (and Irv).

Later, when grandchildren became part of the picture, some special family vacations looked more like “family reunions”, including all the kids and grandkids.  It started with a Windjammer Cruise (1998) with dad, which we liked so much that we lobbied to repeat with the whole family.  Family including grandkids vacationed at “Rocking Horse Ranch” in upstate New York (2001), and at Cataloochee Ranch in Maggie Valley, NC (2004).  Even after dad died, we held two more family vacations, at Fall Creek Falls, TN (2008), and at Pocono Manor Resort (2013).  (Pocono Manor Resort had a disastrous fire in 2019.)

After dad died in 2006, mom sold the Veronica house and moved to American House Senior Living in Riverview.  A lot of later travel included destinations for grandkids’ weddings, like Brian & Lindsey at Mackinaw Island, and Callie & Dylan in Annapolis, MD.  Her last trip was Bob & Becca’s wedding in Baltimore.

More than a chronology of events, the details of a life beg the question of what is left behind, and mom left a legacy of life lessons by her constant example of being true to her values and beliefs.

Mom did not put herself above others.  Her lifestyle was humble, simple, and modest.  Outwardly she kept an even temper and demonstrated patience and understanding when it surely was not always easy to do so.  There were no emotional adverse childhood experiences in our home.  Abuse, violence, and neglect were unknown foreign concepts.

She was considerate and accepting and did not pre-judge.  Once she hosted some previous work friends to visit; nothing was said of their color or background.  She may have disapproved of behavior but never of a person.  If she needed to communicate something negative, she stood up for herself and her loved ones diplomatically.  She supported charities, particularly those which served the less fortunate.

She practiced her faith and prayed regularly; attended church every Sunday.  She was devoted to her husband and family, including her extended family, reveling in their successes and accomplishments, and sharing the sorrow of the challenges they faced.  She eagerly anticipates being reunited with dad in the next life.

Before her vision failed, mom read for pleasure and for intellectual stimulation, and kept up with local, national, and international developments.  She held strong political and social views, which she would eagerly discuss with a considerate listener.

Mom did not complain about her personal challenges.  She never complained about her deteriorating vision and bore her diminished mobility with a positive attitude.  Even when she needed help, she often tried to do things herself, so she didn’t have to bother anyone, sometimes to her own detriment.

Be self-reliant and take personal responsibility for yourself. When challenges come along, just buckle down and do what has to be done.

“Share the love.” Be kind to others and give of yourself.  Show compassion.  Don’t judge. You can never know everything in someone else’s heart, or all the challenges faced by someone else.

Life is hard for everyone.  Don’t behave in a manner that make someone else’s life harder by what you do.

Seek intellectual growth, develop wisdom, and be a good citizen of your world.

Don’t live above your means.  Be honest and trustworthy.

Show up and be there for those you care about.  Prioritize family.