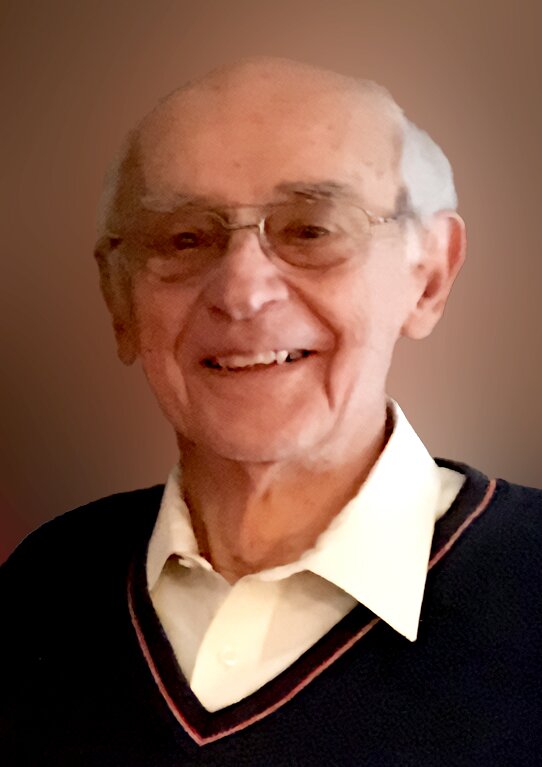 Charles (Charlie) was born March 1, 1929 in Detroit (Delray), Michigan.  He was preceded in death by both parents and was raised by his godmother in New Brunswick, New Jersey where he graduated from St. Peter’s Academy in 1947.  He attended Rutgers’s University for a year before applying to and being accepted into the United States Merchant Marine Academy in Kings Point, NY where he received his bachelor of science degree in Marine Engineering.  Upon graduation, Charlie enlisted in the United States Navy, serving aboard the LST 901 during the Korean Conflict.  After his commission ended, Charlie worked in the power industry in both New Jersey and Michigan.  He married Rosemary Nagy in 1953 and settled in Wyandotte, Michigan in 1957 where they resided together for nearly 69 years.

Charlie was employed by Detroit Edison for over 30 years, focusing on design, repair and operation of boilers and turbine generators at Edison power plants in southeast Michigan.

Charlie was a giving person.  He donated his time and spirit generously.  He served as President of the Wyandotte Speed Skating Club for many years, taking skaters to weekend meets out of town, timing skaters during the many practices both held at indoor and outdoor rinks.  He served on the Wyandotte Bacon Memorial Library Board for over 20 years, resigning in 2021.  He remained an active member of Friends of Library until his death.

Charlie always had an ear to listen, a heart to empathize and a voice to share his many life experiences and situations encountered during his 93 years.  He was a wealthy vault of information, willing to share and offer advice.  He always had a story to make you smile or laugh, comfort you or help you in some way.  He was a regular blood donor to the American Red Cross. He donated one pint short of 18 gallons during his lifetime.  Charlie was an active member of the Knights of Columbus and served as a Eucharistic Minister to parish shut-ins.

Charlie’s hobbies included reading, working crossword and sudoku puzzles, gardening, tinkering and taking care of his furry and feathered backyard critters.  He loved to spend time with friends and family, especially his grandchildren and great-grandchildren.  He enjoyed reading to them and teaching them how things worked.

Charlie also enjoyed travel.  He and his wife, Rosemary, traveled extensively during their retirement years, visiting historical sites in the states and experiencing different cultures and cuisine both stateside and abroad.

Charlie was devoted to and deeply loved both his family and friends. He was always there when you needed him.  Charlie was preceded in death by his beloved wife, Rosemary.  He is survived by sons David and Thomas (Lisa), daughter Mary Lynn (Daniel Treppa), daughter-in-law Lori, grandchildren Philip (Heather), Abbie, Kristin, Chelsea (Rick), Jessica (Andrew), Lauren (Justin), Ben (Sydney), Lindsay (Justin), 14 great-grandchildren: Henry, Sawyer, Chase, Connor, Max, Miriam, Zac, Blake, Landon, Owen, Cam, Jax, Mason and Everleigh Elizabeth.  Charlie also leaves behind his dear brother-in-law and sister-in-law Dennis and Kay Nagy and his two nephews, Steven (Christy) and Christopher (Kim) along with a large extended family and friends who loved him dearly.

Charlie was a one-of-a kind gem.  This world is a better place because of him.  He will be greatly missed.  Rest in peace, Dear Charlie.