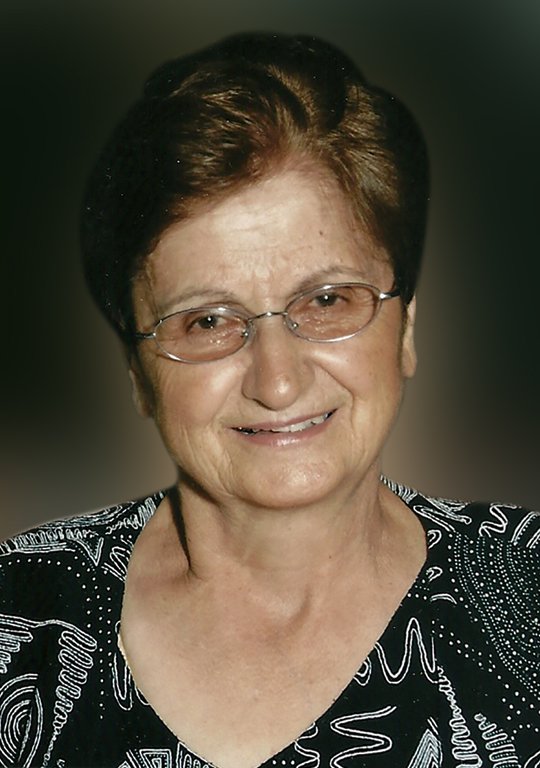 Anna (Ioanna) was born on October 16, 1937 to Sophia and Hristos Kollias in the small village of Polipotamos, Euboia in Greece. As farmers, and with very little, they cared for her the best way they could. When Anna was a little over a year old, Sophia passed away and Hristos eventually remarried a caring woman named Pagona, who Anna went on to recognize as her own mother. Pagona and Hristos had 2 more children, Anna’s sister Katina and her brother George. As most did during this impoverished time, the children spent their days tending to the fields of wheat, picking olives from their trees and fetching fresh water daily from the village spring. They did find a little time to make balls out of ropes and stones to play Jax when their parents weren’t watching. Anna always spoke of her paternal grandmother, for whom she’d been named after, being a comforting presence in her childhood. During cold winter nights, and with only a fire place to heat their small home, she recalled putting her chilled feet between her grandmother’s to stay warm at night.

At just 12 years old, Anna went to Athens to work as a maid and learn the trade of a seamstress. She did this for a few years, coming back to Polipotamos when she could to visit with her family. Then in September of 1956, Anna was sent to live in the United States with only a quarter-sized photo of an uncle she’d never met, but would soon live with, and the dream of a better life. Within a few short months, she met and married John Bessas, the man she would be married to for 57 years. It was with ease that she came to love John’s family as they welcomed her with open arms and genuine hearts. Together, John and Anna had a daughter, Mary, whom she truly doted on and cherished. Throughout life, Anna and Mary were each other’s rock, forming a strong bond that would prove to be able to overcome any obstacle.

In 1982, Anna was first diagnosed with breast cancer, but she fought and prayed for time. Time to see her only child marry and start her own family. In 1983, with Anna in remission, she and her husband gained a son as Mary married Yiannis Kotsogiannis. These two families, Bessas and Kotsogiannis, were uniquely intertwined with love and friendship years before this union, providing Anna with a deep sense of joy and pride. In 1989, Mary gave birth to Ana and in 1992, she gave birth to Marysa. Anna and John lived with their children during the week to help raise their cherished grandchildren. It was then that Ana and Marysa would often cuddle up to “Yiayi” and put their chilled feet between hers. Anna often referred to this time as the happiest years of her life. All three of her girls now know what unconditional love means because of her.

Anna was a lover of animals. She was a gardener who always had many flowers and vegetables growing all around her, to which she’d speak to and smile as they grew. An amazing cook who always had a snack waiting for her grandchildren after school and dinner on the table for her family. Recipes spanned hundreds of pages in her notebooks and she found joy in sharing her favorites with the ones she loved. She was sensitive and playful, quick to poke fun and lighten the mood. But most importantly, she was a shoulder to lean on. She took care of everyone in her life and made sure they knew her heart beat for them.

After 28 years, Anna’s breast cancer had returned. The next nine years were the most difficult, both physically and spiritually. Nurses and doctors often commented on how lucky Anna was to have such a supportive family, but the truth is they were the lucky ones. On July 8th 2019, after a long battle, Anna passed away in the care of her children and grandchildren at home. Her legacy and spirit will live on in the hearts of those who knew and loved her.