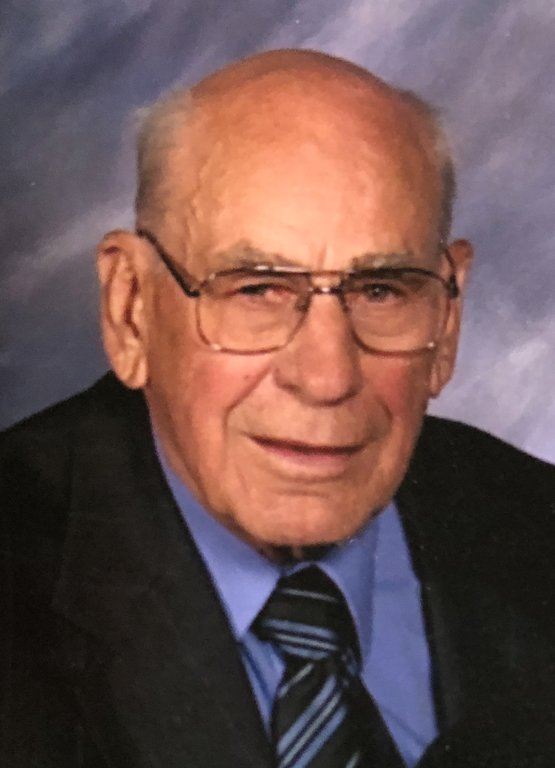 Make Donation
Send Flowers
Share this Tribute:
Share Obituary:
Share Your Memory of
Norman
Upload Your Memory View All Memories
Be the first to upload a memory!

Better known as Gene, he was a man of strong faith with a deep love of family.  He was happiest when spending time with his family.

Gene served in the Navy during WWII.  He co-owned Stronghold Storage in Riverview along with his nephew Ervin Bailey.  Gene retired from Detroit Edison in 1985.  He lived out his days serving the Riverview United Methodist Church as a member and trustee for over 60 years.  He relaxed while spending time at his cottage in Caseville, Michigan, fishing, hunting and boating.  He enjoyed spending time carving wooden ducks.  Gene will be remembered best as a kind, humble and generous man of faith who was always willing to help anyone in need.

The family requests that donations be made to Hospice of Michigan or Riverview United Methodist Church, 13199 Colvin Street, Riverview, MI 48193.

Gene was born in Munson Pennsylvania in a small family home that sat at the top of a Lowe’s Hill. He was the 10th of 11 children to Vida and Ernest Turner (2 siblings died of diphtheria before he was born).

As a boy, he helped around their small farm milking cows, and feeding horses, etc. His parents lost their savings when the banks crashed, so he lived a very modest life. Gene said his parents taught him family, country, religion and to respect other people. He attended a small schoolhouse about a mile from his home where he graduated.

Gene joined us Navy in 1944, 2 months after graduation and then served on the USS Kidd, a destroyer in WWII. The ship was hit in 1945 by a kamikaze plane, 35 men died and were buried at sea. Gene finished his service on the USS Dobbin in San Diego, California. He then returned to Munson Pennsylvania, but shortly after moved to Michigan for employment. Gene first job was at McCord’s, where he supervised a young woman named Betty Perry. Gene & Betty were married in 1949. They immediately began their family with Susie’s birth in 1950. Nancy quickly followed in 1952, then Kathy in 1954. He joined Riverview United Methodist Church where he spent many hours working on the grounds and the interior of the church. Gene discovered Caseville where his in-laws owned a lakefront property and he helped his father-in-law, Harry Patterson build a cottage. Around this time he began working at Penn Salt Chemical. They took one more shot to have a boy, Cindy was born in 1959 His family took annual trips back to Pennsylvania where he remained very close to his siblings and their families.

Gene loved to travel and they took family trips, as their budget allowed. Station Wagons became their car of choice. Penn Salt Power Plant split off and he moved to Detroit Edison where he eventually became the head of that power plant.

Eventually his daughters weddings began, and grandchildren followed shortly after. They bought their place in Caseville. He became a business owner when building Stronghold Storage. He loved gardening and exploring the outdoors, hunting – deer, pheasant, ducks, rabbits, and playing cards, Canasta, Pinnacle, and 500.

He attended every family event – kids sporting events, graduations, birthday parties. Gene retired from Detroit Edison. He started carving ducks. He traveled to every state of the union except for Alaska. Norman was stubborn – when he made his mind up, it was hard to change it. He cherished his wife Betty, he would do anything for her Gene & Betty had a fun-loving relationship.  She coined nicknames for him like:  Horseface and Frankenstein. He loved, loved, loved to eat but never gained weight. Desserts and strawberries were his favorite foods.

Gene never drank alcohol and rarely swore. He was a devoted Christian and was faithful in all aspects of his life. If he lost his temper, he often accidentally hurt himself (which we secretly laughed about). He was happiest when he was with his family. Gene would help a anybody who needed it – a friend, a family member, a stranger. He was happiest when taking care of others. Gene was a hard worker and loved to stay busy. He loved to tell stories, yet he was a very good listener. Gene was humble, never bragged about his own achievements. He was very matter-of-fact when speaking. He spent very little money on his own needs, yet was extremely generous to others. Overall - people will remember Gene Turner as a hardworking, family man, deep in faith who was kind, generous and caring.  He was a unique individual, like no other.